Reeves said he expects tomorrow to place new counties under mask requirements and hinted at statewide restrictions regarding bars.

“We are not trying to induce panic,” he said during a press conference on Thursday. “We are trying to make sure there’s a healthy respect throughout this state for this deadly virus.

“There were times in this pandemic when fear was over the top. Now the pendulum has swung where we have too many people acting as if this virus doesn’t exist.”

After setting a single-day record for new cases a week ago, Mississippi has surpassed that mark three times since. More telling, the seven-day average is now at 1,179 cases per day, a 71 percent increase in the last two weeks.

In seven of the last nine days, the state health department reported daily new cases of over 1,000; Mississippi recorded only two such days between Mar. 11 and July 10.

Dobbs added that eight hospitals reported having no vacancies in their ICUs. The seven-day average for COVID-19 hospitalizations continues to rise, now having increased for 34 straight days, and 44 percent in the last two weeks. 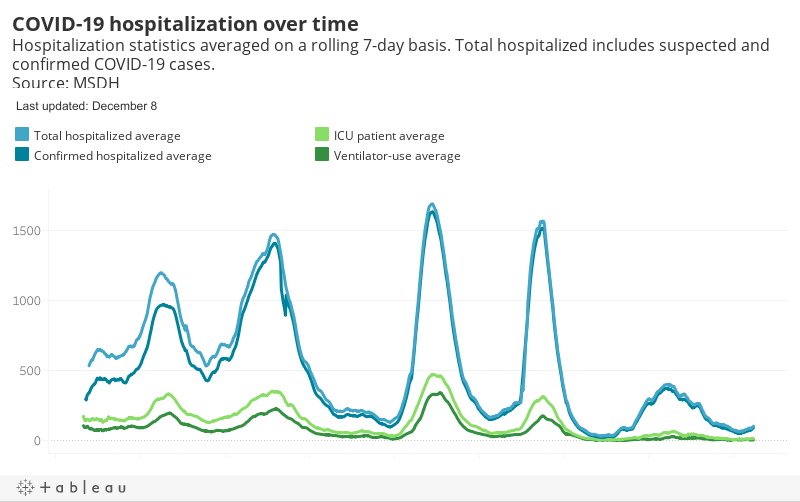 The rolling averages for ICU patients and patients on ventilators have increased for 25 and 18 straight days, respectively. Forty percent of all the state’s ICU patients are from coronavirus, Dobbs said on Wednesday.

“That’s absolutely astounding, just a week ago we were at 30 percent,” Dobbs said.

On Monday, Reeves added 10 counties to the list of places under a mask mandate, which is set to expire Aug. 3.

During a press conference on Wednesday, Reeves explained the criteria for adding counties to that list. There are two measures the state uses:

There are seven counties that have passed the first metric but aren’t included in the mask mandate: Warren, Pontotoc, Lauderdale, Coahoma, Jones, Lee, and Lamar counties. Based on today’s numbers, no counties have passed the second metric. 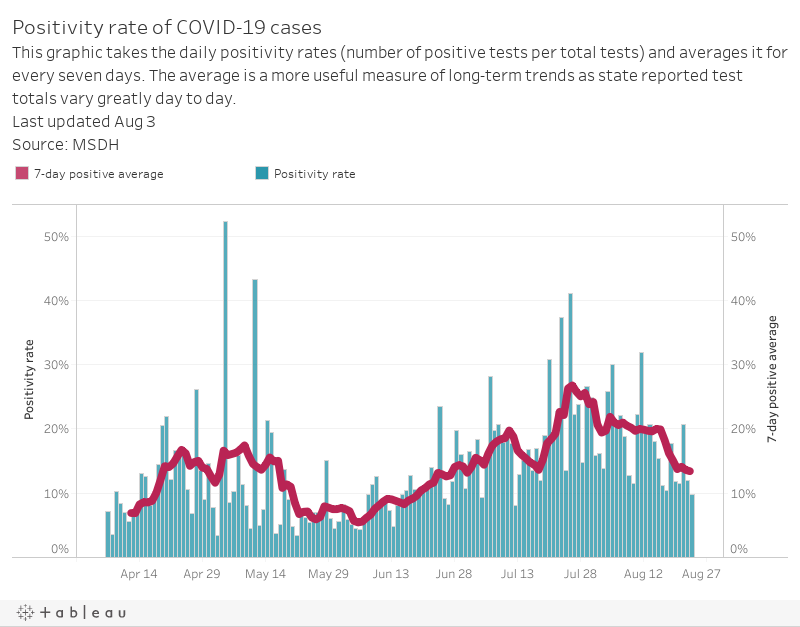 While testing has increased — at about 6,700 tests per day in the last week — so has the positivity rate of tests, averaging 18 percent over the last week. That figure peaked at 20 percent on July 11.

This article first appeared on Mississippi Today and is republished here under a Creative Commons license.” data-src=”https://mississippitoday.org/?republication-pixel=true&post=714334&ga=UA-75003810-1″ />

Over half of Mississippi renters could face eviction during pandemic without protections from Congre...
Mississippi among worst states for childhood COVID-19 infection rates per capita
Mississippi teacher’s death during first week of school stokes COVID-19 outbreak fears
Reeves delays start of school only in hot spots, orders statewide mask mandate
Statewide Isolate at Home Order Issued for those Diagnosed with Coronavirus